Mike Petty will insist -- and rightfully so -- the award he received Sunday at the N.C. Soccer Coaches Association annual awards ceremony at East Chapel Hill High School was about a lot more than him.

But Petty was the right person to accept the official proclamation of something most people associated with high school soccer in the state already knew.

It was a fitting tribute that day as Petty, no longer being an official member of the NCSCA having retired as Hunt girls soccer coach years ago, was on hand to deliver the event's keynote speech.

Petty, who was Willis' coach at Hunt, centered his remarks on what an exceptional person she was. Willis' tragic murder in 2004 led to the creation of The Brittany, a showcase designed to raise funds for the scholarship in her memory but, more importantly, to celebrate the life of a vibrant young women taken all too soon.

Petty, a member of The Brittany's original organizing committee and the chairman of the competition committee, focused his remarks on Willis' dedication to her team, sportsmanship and her zest for life.

"Heroes have always been important to me," Petty said in his remarks. "Brittany was my hero."

Thus, The Brittany has come to be about more than just soccer. Sports are supposed to teach us life lessons and, as Petty reminded in his speech, those lessons are for everyone, even a former Army guy who can say a teen-aged girl was his hero.

"If we look around there's a lot of people around us that we all have something to look up to," Petty said in a telephone interview Tuesday night.

Petty said he was thrust into the position of point man for accepting the awards because "I'm in touch with all the coaches and I'm the face they all know.They could have easily given to it to (The Brittany Organizing Committee members) Philip Thompson or Mike Godwin or any number of people involved with The Brittany...It's really a tribute to all of them."

While Petty is hardly the only person responsible for the success of The Brittany, he can't shy away from his contributions.

North Johnston Athletic Director Brent Walston, who coached at Hunt with Petty and is also the NCSCA vice president, pointed out Petty has endeavored to bring teams from all over the state to The Brittany.

"When you have an association that covers the whole state of North Carolina and as Mike has done trying to get teams from Charlotte, Boone and Manteo, for instance, that really brings (The Brittany) into prominence," Walston said.

During Petty's speech, he asked those present to stand if they had played in The Brittany and more than two dozen rose. In fact, there were eight former sportsmanship award winners on hand Sunday.

In five girls events, The Brittany has attracted 231 teams while 177 boys teams have played in four showcases. That's been a steady climb from the 18 girls teams that participated in the first showcase in March, 2005.

Numbers such as those -- and the broad smiles seen each March and August at Gillette Athletic Complex -- that tell the true success of The Brittany. Nevertheless, it was nice to have this special event officially recognized by the NCSCA as the "best high school soccer event in the state."

"It means something different when someone else says it instead of us saying it," Petty reminded. 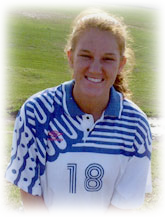 If you or your school would like to make a contribution and you are in need of a W9 form from The Brittany, please click the button below and request that one be sent to you.